It’s April – the Earth is calling

At long last, it’s the wonderful month of April. Here in Portland, the cherry trees are blooming and there’s an energy in the air as winter releases its grip.

April is also the time to show your serious support for the planet.  Earth Day is on April 22. This year the  Earth Day Network is organizing the huge “March for Science” in Washington D.C. on that day.

In my work, I happily focus on the intersection of the earth and business every day. But this year, April’s Earth festivities call for “all-hands-on-deck.”  And you can help.

The withdrawal of clean energy help at a federal level…

The new administration has chosen to withdraw its support from the Clean Power Plan, sign off on building the Keystone pipeline that carries fossil fuel, and label global warming a “concept … invented by the Chinese” – to name just a few truly awful actions.

In fact, global warming is something that scientists have been worried about since the 1980s. And for many of us regular citizens, it’s something we have seen with our own eyes. Think Hurricane Katrina in 2005, Superstorm Sandy in 2012, or the massive wildfires that burned over 10 million U.S. acres in 2015 alone.

I am baffled that the feds have chosen to ignore the hundreds of thousands of American jobs that come with renewable energy, smart home technologies, and electric vehicles. There are endless business opportunities, right here in America, for everything from sustainable fashion to sustainable agriculture.

That’s where you come in. 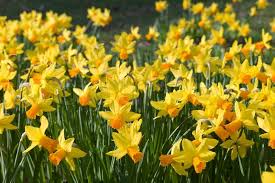 … means that action at the state and local level is crucial

I moved to Portland, OR because the city has a well-deserved reputation, not only for being weird and making lots of craft beer, but also for being “green.” My apartment building is LEED-certified, the public transit is so good that we sold one of our two cars, and there are more farmers markets offering organic food and locally made goods than I can shake a stick at.

That’s the norm here. You may have heard that Nike and Intel have their headquarters here. But did you know that SolarWorld and Vestas (the world’s largest builder of wind turbines) are just down the street too? Did you also know that “wind turbine technician” is one of the most sought-after employees right now?

I’d rather support American jobs and American workers, and green businesses do that far better than organizations that outsource overseas. Indeed, “green” thinking is so embedded here that it starts early. I recently read of the Portland teen who developed a portable solar panel that homeless people can use to power lights or devices.

So this April, I’m putting my time (and money) where my mouth is by:

This week I’m passing along an invite to you from MIT’s Climate CoLab. The CoLab is a crowdsourcing platform where citizens work with experts and each other to create, analyze, and select detailed proposals for what to do about climate change.

On March 6, The CoLab launched some 22 new contests on everything from our energy supply to transportation options to a U.S. carbon price.

These contests are open to everyone. You can contribute to an existing proposal or create your own. Proposals can win a “popular” vote and they can be judged as winners by a panel of experts. The winner takes home a Grand Prize of $10,000 and gets the opportunity to present their proposal to experts who can help implement the idea.

“As high performance green buildings increase in complexity,” Dahan wrote in her proposal, “we need to give building technicians the skills to maintain buildings and achieve high performance energy goals.”  The curriculum, when in full motion, is projected to save 33 trillion metric tons of carbon each year in the United States alone.

What’s neat about the Climate CoLab

The new contests are open now. Peruse your choices (there are about 7 of these I’d sign up for in a heartbeat). Or add your own new idea. You must enter before Saturday, May 16, 11:59:59 PM Eastern Time.

The CoLab sponsors tell you when voting on the various proposals will occur. If history is any guide, the awards will be announced around November 2015.

So join in. You might just make the world a better place – for all of us!

My New Year is off to a fast start, and that’s a happy thing.

Today I’m sharing some posts that I wrote late last year and early this about cars, food, jets and the circular (green) economy.  Disclaimer: I was paid to write these for Earth911.com – a client – although not by the individual companies. I think the information is useful.

Earth911.com is a treasure trove of information.

And while the oil and gas industries have grown with the shale oil boom, scientists have told us for years that using fossil fuels puts greenhouse gas emissions in the air, which leads to global warming, which leads to climate change. And all the droughts, floods, storms, property damage and weather-related insurance claims that that entails. Fossil fuels need to stay in the ground.

It reminds me of a bumper sticker I saw when I lived in North Carolina. It said, “Tobacco put my kids through school.”  Unfortunately, that tobacco probably killed or sickened people as well. People need jobs, but not jobs that harm other people.

So here is a sample of my articles. It heartens me to know that green business is taking off in all directions. And I want YOU to be heartened – and more aware – too!

Really, this is just the tip of the green business iceberg. I’ll be writing weekly for Earth911.com, so if you are interested in even one of these, there are plenty more on tap.

From sustainability to employee engagement to profitability 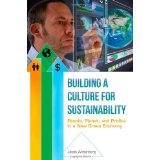 Companies often struggle with the “how.” How do you build a culture for sustainability in your particular company? Jeana Wirtenberg’s new book,  “Building a Culture for Sustainability,” helps answer that question.

She spent 2 years profiling 9 companies in depth about their sustainability programs and practices. These are not “the usual suspects” like Whole Foods or Patagonia. These companies are big guys who have been around, in some cases, for over 100 years. They want to become more sustainable, but have a lot of history and baggage to deal with.

The list below captures just 1 program or practice from each company. It doesn’t do justice to the full book, but it may persuade you to take a peek. If your business is in one of the industries covered, read that chapter. Better yet, pick a company in an industry different from yours. It’s an easy way to get a fresh perspective for your own sustainability journey.

A treasure trove of examples

There are many ways to build a culture of sustainability.  If you want your business to perform well into the future, sustainability is your path to superior results.

Building a sustainable culture is not about annual events and lip service. It’s about tapping into the power of all your people to re-imagine the core of your business in sustainable ways. That’s an exciting mission for people at all levels.

So if your company is struggling with the “how,” grab a copy of Ms. Wirtenberg’s book.  It offers detailed examples of what companies are doing. It is also frank about the challenges they’ve faced. These companies don’t have some secret sauce that makes the transition to green easy. But you can learn from the road they’ve already traveled, and build a sustainable culture that suits your organization.

In case you missed the announcement, Cosmos: A Spacetime Odyssey and Years of Living Dangerously (YOLD) received 14 Emmy nominations between them last Thursday (12 for Cosmos, 2 for YOLD.)

I watched both series and was mesmerized by the clear, captivating, science-based information they contained. Trust me – TV has come a long way from the snooze-inducing documentaries of the past.

If you missed one or both of the series, don’t despair. Cosmos is available now and Years of Living Dangerously in out on DVD in September. 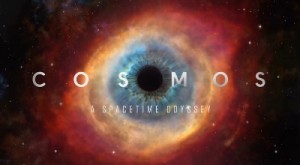 Neil deGrasse Tyson is an inviting guide on a journey of amazing scope. Whether talking about Earth’s precise location in the universe, or exploring the operations of a living cell, he speaks like your neighbor next door. He’s clear and plain-spoken.

The series touches on many sciences – biology, physics, chemistry, astronomy, electromagnetism, and more. Rather than presenting concepts, the series tells stories – often of the scientists themselves, and how they made their discoveries.

It looks like FOX spared no expense on the production. Whether Tyson is standing on actual thawing tundra in Greenland or piloting his “spaceship” through different parts of the galaxy, there are amazing visuals throughout.

With each episode, Dr. Tyson leaves you excited about science. It had my whole family watching together and saying, “Wow – that’s amazing!”

Years of Living Dangerously – the urgency of climate change today 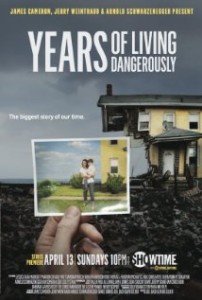 While Cosmos covers a range of scientific people and discoveries from the distant  past into the future, YOLD is very focused on climate change today around the world.

The opening sequence follows Harrison Ford to Indonesia to see deforestation first-hand. Another episode features Arnold Schwarzenegger talking about the wildfires that seem to burn continuously now in California. The 9 episodes in this series make the urgency of climate change real and powerful.

There are no models of sea level rise or graphs of greenhouse gas emissions. Just the stories of real people – from farmers  to firefighters and many more in between – who have already been devastated by storms, droughts, and the ever-creeping rise of the oceans.

Prepare to be amazed…

So kudos to Fox and Showtime for airing these series. Their Emmy nominations are well-deserved. Want  your kids to spark to what is cool and creative and fascinating about science? Grab these series when you can and get ready to say “Wow!”

Phew! What I think of as “Earth Week” is coming to a close.

As I reflect on this, a great blue heron is sitting on my pool cage, cleaning his feathers.  His presence feels like a good omen to me.

Since I can’t do justice to all the Earth Day happenings,  I’ll just mention 3 happy highlights: 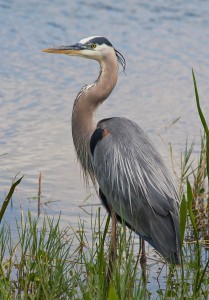 A visit from a great blue heron makes it a good day!

Globally, the good folks at Earthday.org report that over a billion people in 192 countries participated in everything from coastal cleanups to peaceful protests calling for cleaner energy. That’s a lotta people.

Locally, the Sustany’s Foundation helped celebrate the 10 new “Green Business” designees in the City of Tampa, Florida. The 10 restaurants participated together in a program, tailored to their business, that tackled everything from food waste to recycling. Go Tampa!

Individually – I felt privileged to present a webinar on “Green Tips for the Home” to a client. Raising awareness about what a carbon footprint is – and how to reduce it while saving money – is a treat for me.

While Earth Day is officially over, for me and every other business that is transitioning to greener operations, it really isn’t over. It won’t be over until our economy – from our buildings to our transportation to our energy grid – is on a sustainable footing.

And because I want to hurry the arrival of that day, tomorrow – and all the days after – will be Earth Day too.

What did you do for Earth Day? I’d love to hear in the comments!

My gift to you this Earth Day is a “heads-up” about a something called “Clean Energy Victory Bonds (CEVB).”

Last week I tuned in to a webinar from Green America’s Green Business Network that explained them.

I think it’s a great idea. Here’s why:

Why are they needed?

What will CEVBs  do for our economy?

What will they do for the environment?

CEVBs will support both research into and deployment of technologies to:

How can you get involved?

Required caveat: I am not an investment adviser. So use your common sense when it comes to this, or any other, financial decision.