Here it is – the end of my short summary of Andrew Winston’s book “The Big Pivot.” The last chapter is called “Build a Resilient, Antifragile Company.” 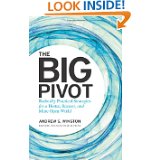 By “antifragile”, he means a company that doesn’t just survive, but gets better. Like a muscle that strengthens when you exercise it.

“You build resilience to protect yourself from the fact that you don’t know what will happen.” According to Winston, “We need systems that deal well with volatility and uncertainty.”

Foundations of a Resilient Business Include:

According to Winston, the “Big Pivot” has to come from the top – the C-Suite. (While I agree, I am less optimistic that these guys will make the right decisions.)

Finally, there will be winners and losers. In Winston’s view, the vast majority of us will win in  this new world, if for no other reason than that “ensuring our survival is a pretty big victory.”

My favorite lines from the book

I started out bookmarking pages of the book on my Kindle. I stopped because almost every page had an eye-popping statistic or gem of a story. The 5 lines below are just a taste of what’s in the book. Enjoy!